▸▾ Claim This Listing
You are not currently logged in. Please login or register first. When registering, you will receive an activation email. Be sure to check your spam if you don’t see it in your email within 60 minutes. 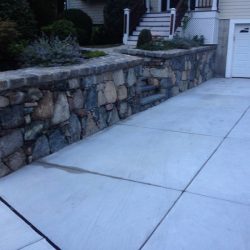 Fred DeRoma & Son, Inc. was established in July 1974 by Fred DeRoma. The elite Boston road contractor began with a simple backhoe, six-wheel truck, and a bucket of tools. Fred started his construction career building and renovating houses throughout the City of Boston. He was quickly able to establish himself as a reliable and trustworthy contractor who finished projects on time and within budget. The reputation of the company as a quality contractor continued to grow when Fred’s son Andy joined the business in 1976.

After hiring subcontractors for driveway and sidewalk repairs that were trenched through for the utility connections, Fred and Andy DeRoma realized they could repair the work cheaper if they did it themselves. So in 1978, after learning from this experience, DeRoma procured their first bonding to allow direct bidding on Public Work as a General Contractor for up to $250k. Fred DeRoma & Son won their first sidewalk repair contract with Boston Public Works for $90k.

Thank You For Visiting Us!